Supporting the Next Generation and Beyond 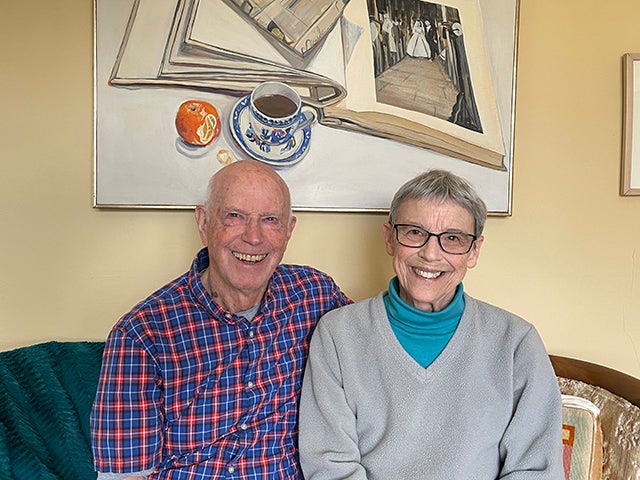 By establishing a charitable remainder trust for their children, Dick AB ’58 and Lucy Sallick are helping to secure Harvard’s future as well as their family’s.

When Dick Sallick AB ’58 arrived in Cambridge as a first-year Harvard College student in 1954, he had no idea that Harvard would become a familial touchstone throughout his life. Coming from a small Quaker school in New York, it took time to adjust to his new campus community, but over the next four years, he enjoyed his coursework and made lifelong friendships.

“I found a kind of freedom there and met people from all over,” says Dick, who studied history while also completing premedical courses. “I've always been grateful that I went to Harvard.”

In 1959, while attending medical school at Cornell University, he was introduced to Lucy Riley—the sister of a classmate—and the two were married a year later. Lucy also had ties to Harvard: her mother, Matilda White Riley AB ’31, AM ’37, an alumna of Radcliffe College, was a trailblazer in the field of social gerontology, often working side by side with Lucy’s father, Harvard alumnus John W. Riley Jr. PhD ’37. In addition, Lucy’s grandmother studied mathematics at Radcliffe in the 1890s.

Over their 60-plus years of marriage—as Dick, a psychiatrist, and Lucy, an artist, raised a family that has grown from their three children to include four grandchildren and two step-grandchildren—the couple has maintained a strong connection with Harvard. Lucy curated a collection of her mother’s correspondence, writings, and photographs for Radcliffe’s Schlesinger Library. Their daughter, Hilary White Sallick AB ’85, EdM ’91, a teacher and poet, earned two degrees at Harvard. In 2006, Dick and Lucy visited Italy with their grandchildren on an intergenerational trip hosted by the Harvard Alumni Association. And most recently, Dick attended a Harvard-sponsored history seminar on the U.S. Constitution.

“I appreciate the broad education,” he says. “When I’m learning new things, I have this coatrack of memories to go back to, thanks to Harvard.”

When they made the decision to establish a charitable remainder trust for their children, choosing Harvard wasn’t just about their history with the University. “We wanted to do something for our kids,” says Lucy, “but we wanted to do it in such a way that would also serve the public good. We’ve been thrilled to see the University embrace social justice issues—particularly around race and the Black Lives Matter movement—and giving back in this way supports both goals.”

With a charitable remainder trust, the Sallicks can provide income for their children for a period of time and then provide support for Harvard when the term ends.

“We had confidence in two things: Harvard’s values and its money management,” explains Dick. “I have confidence that Harvard knows the best areas to support. The money out of our estate can go to things we believe in—and at the same time it can benefit our children. The two things fit very well together.”

This story is featured in the Spring 2022 issue of the Gift Strategies newsletter. For more information about charitable remainder trusts, please visit our webpage or contact us with any questions.