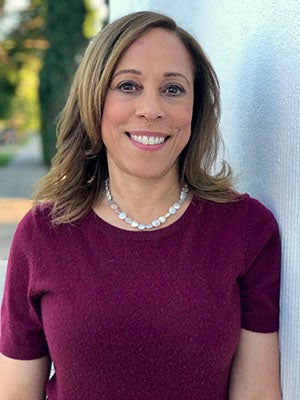 For someone who never read comic books growing up, Kelly Goode has gone deep into the superhero canon. As a creative executive at Warner Bros. Television, she works on as many as eight shows at any given time, moving easily between The Flash and Supergirl to Westworld and Shrill.

A parent of a College sophomore and a loyal donor, Goode believes what she learned at Harvard and her connections to its community led her to her life in television. She shares what brought her to the DC Multiverse and why she encourages those who want to have a career in entertainment to get advice from fellow alumni.

Describe your path to Harvard.
I applied to Harvard in the late ’70s when it wasn’t quite as common for kids from public schools in Southern California. I wasn’t considering schools on the East Coast but, after taking the SATs, I received an application from Harvard. Somehow, I ended up on their radar, and I was shocked—I didn’t feel like I was Harvard material.

How did your Harvard experience lead to your career?
Harvard opened my mind to a lot of different paths. I felt prepared to go into any workplace able to learn. I had narrowed my interests to journalism, law school, or entertainment. Then, a Harvard alum from a couple of classes ahead of me who was working in television helped me get my first executive job at a studio.

What do you do in television?
I work at Warner Bros. Television as a current programming executive, which is like a project manager for a television show. I play a supporting role as a creative advocate. I’m reviewing each episodic storyline, reading scripts, looking at dailies, talking about new characters. I deal with the day-to-day with the showrunner and ultimately do everything to support their vision.

What do you think makes a good story?
I think it comes down to characters that you really can feel engaged by and invested in. The plotting, visual effects, and all of the bells and whistles that go around it are crucial, but I think that great people at the center of a story is always what is going to engage an audience.

You’ve worked on shows like The Flash, Supergirl, and Batwoman. What’s it like being an expert on superheroes?
I feel lucky that Warner Bros. owns the DC Comics properties. I did not grow up as a comic book person. I knew the basic main characters, like a Batman or a Superman, but I wasn't deeply immersed into the canon, as they call it. I think anyone who comes and works at Warner Brothers in any creative capacity has to be a quick study and learn it. And now over the last four years, it's been really fun for me to become a superhero geek.

What have been some of your favorites?
Each show has its own style and audience. When I’m on an airplane or out in the world, I’ll have different people who will talk to me about very specific shows. A lot of young men love The Flash. And families watch Supergirl together, which is very optimistic, hopeful, and positive. We have great showrunners who are immersed in the ins and outs of the mythology and characters. There are lots of Easter eggs in all of them and fun things for the people who are super fans.

As a woman who has worked in television for thirty years, what has changed?
I was fortunate early in my career to work for Lifetime—an eight-year-period where I was collaborating with a team of women in very high positions in every department. I took some of the thinking I learned there and applied it elsewhere to think about what’s not on the screen.

What are we missing? It could be an ordinary thing. If we’re coming up with a villain character, does it have to be a white man? You open yourself up to think about what's not being done and all kinds of ways to represent diversity that makes the storytelling more interesting and more unexpected.

As streaming and new platforms have changed the industry, what do you think is next for television?
I would be a very rich woman if I knew. Entertainment tends to reflect the real world and there’s a kind of back-and-forth. Over the last few seasons, there are a lot of shows that are what one would call genre shows, like superhero or fantasy, that are making comments about our world. Sometimes they catch on with viewers because some element is reflecting ideas, themes, fears, and hopes that we have in our real lives. Maybe it's easier to deal with those subjects through characters that are living in a different setting.

What advice would you give an upcoming graduate who's interested in the entertainment field?
Reach out for informational interviews with alumni and connect with so many great resources, like Harvardwood. Things have changed so much in this business and there’s not going to be one career path to follow. Ask an alum: “How did you get there?” I do that a lot for Harvard students and other kinds of younger people.

Does Harvard still play a role in your life?
My daughter is a sophomore at the College. It is a special experience to revisit some of the same places around campus where I had spent time or to hear her talk about certain things. She will have her own journey, but it has been a lot of fun.

Many of my dearest friends I knew at Harvard are now living here in Los Angeles. Within a given week, I’ll be talking to people from my class or classes ahead or behind mine. I kind of forget, truthfully, that we even went to Harvard together. They are just some of my best friends in life.