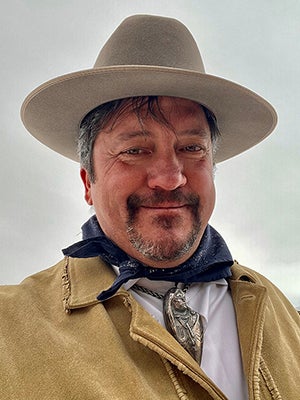 Growing up, Deacon Turner ’91 had never dreamed of attending Harvard—or any other elite school. None of his immediate family had gone to college. It was his high school debate coach who encouraged him to apply, and financial aid that made Harvard a reality for Turner. What followed were lifelong friendships, supportive advisors, and scholarship that changed his life. Today, Turner lives in Denver and works as a financial advisor. Learn how mentors helped him flourish, how he hopes to help other students like himself, and the meal he craves when he’s away from Cambridge.

What led you to Harvard?
I grew up in extreme poverty in northeast Oklahoma and in rough environments. When I was a sophomore in high school, my mom and my uncles went to prison for selling drugs. I lived mostly with my grandparents and aunt.

I had a tremendous high school mentor debate coach, who helped me continue to thrive when all that happened. He asked me to apply to elite schools—told me I was going to apply, even though nobody in my family had gone to college. When I got in, the most important thing was that Harvard met my financial needs. Ultimately, my financial aid package was better than my tuition would have been staying in state.

What was it like going from Oklahoma to Harvard?
I'd never seen the campus, and it was quite a culture shock. One of the things I love to point out is that when I moved into Canaday Hall, everyone was complaining that it was the worst dorm in the Yard. I was like: We have showers. We have heat. What is wrong with you people? [Laughs]

At first, it was intimidating. You're going to school with all the kids that went to Exeter and Andover. You’re thinking: How am I ever going to compete with this? And then you do. So, it was a positive culture shock.

What were your College years like?
I had a singular experience. I developed extremely close friendships and relationships that have remained true throughout life. I received deep mentoring from folks like Eliot House’s Allen Heimert (former faculty dean) and Don Bacon (former senior tutor). And I was named a Truman Scholar and a Rhodes Scholar. I ended up at Oxford studying prehistoric sub-Saharan African archaeology for my graduate degree, and I lived in southern Africa for some time.

Looking back, what do you find most meaningful about the experience?
I would say it's the world perspective I received and the friendships. I regularly read studies about how isolated 50ish-year-old males are. But I am a part of three rooming groups that have all stayed tightly bonded and communicate on a daily basis. We’re all there for each other, and we get together all the time. I think everybody always focuses on the career elements of Harvard—and I’ve had a successful career.

But what Harvard has meant to me has been much more about the fullness of life and the quality of life that came during college and after.

What are you doing now?
For the last 24 years, I’ve been a financial advisor and senior leader at Alliance Bernstein, which is a large global investment management firm. And I volunteer for the Cherokee Nation. Since 2011, I've been on the board of Cherokee Nation Businesses.

You’ve stayed really engaged with Harvard as an alumnus. Why do you volunteer?
You’ve got time, treasure, and talent that you can devote to something. And I've tried to do all three for Harvard. I’ve been an active interviewer. Particularly in Oklahoma, I like to talk with rural and Native American kids.

I care deeply about making the opportunity available for folks that wouldn't otherwise have the chance to go to school. For me, it was the first time I was around hyper-educated and truly wealthy people. Yes, there’s an imbalance of wealth in this country, but that’s not going to change any time soon. So it’s a tremendous opportunity for kids from less fortunate backgrounds to get into a high-functioning environment where they can get that exposure and learn how to have impact in their own community.

You volunteer as a chair of the John Harvard Society, encouraging others to make a planned gift to Harvard. Why do you think they should give back?
You don't necessarily know when you're going to get hit by the proverbial bus, so building it into your tax and gifting strategy means that what you would like to get accomplished, will get accomplished.

I'm a proof statement that gifts can make a difference, because somebody gave the money so I could go. I consider that I went for free, and I feel that's the only way to pay it forward. My goal is to pay for at least one other student through my combined donations.

You regularly return for Reunions. What’s the one place you always find yourself going back to in Cambridge?
I tend to make sure I get by Pinocchio's and see Ralph. I don't eat the large sub anymore, but I still like to get a cheese steak.