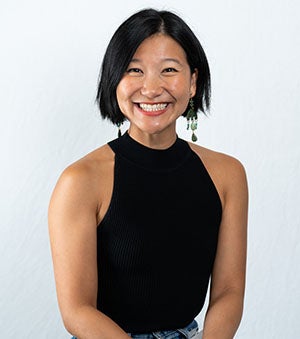 Amy Huang may not have imagined her life in Seattle, living happily with four housemates, four chickens, three cats, and a rat. But she’s not surprised that the sense of possibility at Harvard led her there. While at the College, she studied behavioral economics and global health, and was deeply involved in the Harvard Square Homeless Shelter. She draws serendipitous lines from these experiences to her role at The Good Food Institute, a nonprofit think tank dedicated to building a better food system. She shares why she thinks advancing alternative protein is the key to many of our most pressing problems and why she’ll always turn to her Harvard community for conversations that shape how she sees the world.

Can you share a bit of your Harvard story?
I wrote in a letter to myself when I was in the seventh grade that I wanted to go to Harvard. But when senior year rolled around, I only applied to appease my dad. It just felt like an impossibility. But because it was one of his longest-standing dreams for me, he—thankfully—wouldn't let it go. I submitted my application on the very last day. I remember the total awe when I got in, that wave of disbelief, and the sense of possibility that followed. Harvard has been one of the best things that has happened to me in my short life so far.

What made it so special for you?
I am grateful to Harvard because the academic environment really supported my discovery. It allowed me to study a little bit of everything. I learned how to think critically about the world and examine the same set of questions, societal challenges, and complex systems through a different set of lenses. For example, what does the food system look like through the frame of a microbiologist, technologist, philosopher, and historian? I didn't at all feel like I had to stay on a linear path to some predefined destination. It was a place of so much possibility, curiosity, and exploration, and I was able to grow in so many unexpected ways because of that.

How did it shape your path after College?
My time with the Harvard Square Homeless Shelter was one of the most formative experiences. I volunteered and then became a resource advocate, supervisor, and director, leading the street outreach team. It was one of my first times engaging earnestly with a project of mutual aid.

A lot of times I find that our desires to "make the world a better place" can mean that we end up doing work that feels several layers removed from the people and communities we're trying to serve. And that doesn't mean our work isn't impactful, but it can mean that the solutions we propose are more likely to be out of touch and impractical—unless we're careful about centering them on a deep, foundational understanding of the people we're trying to build them for.

I don't think you can really understand the suffering of millions of people around the world unless you first know how to engage meaningfully with the suffering of one person in front of you. How do we empower individuals experiencing homelessness and connect them with meaningful resources, while also preserving their agency? It's the capacity to challenge basic assumptions and hold the nuanced experiences of others that I carry with me in my work today.

Can you explain your work with the Good Food Institute (GFI)?
We are trying to build a better food system centered on alternative proteins. Industrial animal agriculture or modern means of producing meat are at the center of a lot of the most pressing problems facing humanity. Not only do 20 percent of global greenhouse gasses stem from industrial animal agriculture, but there is also the biosecurity risk that comes from animals as carriers of zoonotic disease that lead to pandemics like this one. Then there’s the lens of global food security. Every little disruption that we might be experiencing to the food chain is deeply consequential in many regions of the world.

To funnel the vast majority of the world’s calories through animals and then turn them into a tiny allotment of food for human consumption is not going to cut it if we’re to feed 10 billion people in just a couple of decades, especially as meat demand continues to skyrocket. But if we can create meat—meat that people love—that’s produced in a way that tastes the same or better, costs the same or less, and removes animals from that equation? We can build a more sustainable and equitable protein supply that serves everybody, using plants, animal cells, and microorganisms.

There are so many layers of distance to close with our food system—racially, geographically, temporally, and specially. The people of the future deserve a habitable planet to exist on. People in our communities and halfway across the world deserve to have nutritious food on the table, and non-human animals deserve the consideration we extend to humankind. I think alternative proteins are a really big part of helping us get there.

What role do you play in this?
At GFI, I work with universities to build education and research programs focused on alternative proteins. I know people see plant-based options on the menu everywhere, and they think we've already made it. But there's so much foundational science research that still needs to happen if we're going to make these novel food technologies good enough to usher in a true paradigm shift. Research universities like Harvard play a really important role in this. There's so much academic infrastructure that can be mobilized in service of the climate crisis and finding a tractable alternative to industrial animal agriculture is a major piece of that.

In 2020, I founded a program called the Alt Protein Project, which is a program training students to seed alternative protein courses and research projects at universities around the globe. We currently have 36 chapters across five continents, and we’re working on expanding our community to other top research universities.

If you told your seventh-grade self what you’d be doing now, what do you think she’d say?
I like to think that she would be surprised and incredibly proud. My uncle was a grasshopper photographer, so as a child, I would spend a lot of time outdoors marveling at bugs and other critters with him. Even then, I felt a deep connection to nature and animals, and it’s very apt to see how those two loves made their way into my professional life.

What do you hope for in the year ahead, professionally and personally?
I hope universities, corporations, and governments see the importance of alternative proteins in helping help us build the world we know is possible. And personally, I hope to continue climbing mountains, gardening, and investing in my community.

You’re active on your Class Committee and have served as a schools and scholarship interviewer. Why do you stay engaged?
Harvard gave me some of my best friends who will probably be my life partners through the end of time. They are always the source of soul-nourishing, world-expanding conversations.

I think one of the things that Harvard gave me and that I continue to feel today is this sense of expansiveness. We know there are better futures out there and that we can be agents in building them. I love getting to stay connected to the Harvard community because it brings me closer to that sense of possibility.