A Global Citizen Gives Back 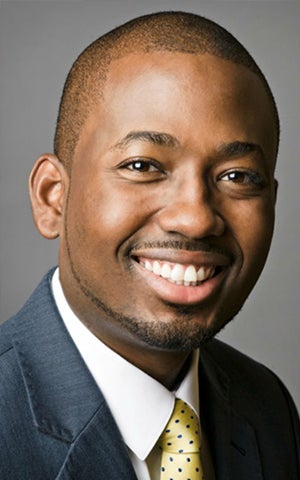 By age six, Sangu Delle ’10 had already decided he would attend Harvard. His father had received some University materials at their Ghana home, “and when I asked him, ‘What’s Harvard?’ he said, ‘That’s where you go to get really smart.’” The young boy wrote to Harvard and asked when he could start.

His drive led Delle to Harvard Summer School and Harvard College, where he began building an impressive record of service to Harvard and his country. “I wouldn’t be who I am today if it weren’t for Harvard,” says Delle, now working toward his JD/MBA degrees and co-chairing fundraising efforts for his 5th reunion.

As an undergraduate, Delle and his roommate Darryl Finkton ’10 marshaled their outrage at global inequality by delivering clean water and sanitation to a Ghanaian village. Their project became the focus of Delle’s African studies thesis and evolved into a non- profit that now serves 120 villages. Delle also leads an investment company he launched sophomore year to promote business innovation in Africa.

Delle devotes time to Harvard as an admissions interviewer, a resident tutor, and an advisor to the University’s newly established Center for African Studies. To support students seeking to carry out projects in their communities “that will change the world,” he has established a social engagement research fund that honors Evelyn Brooks Higginbotham, Victor S. Thomas Professor of History and of African American Studies. As Delle sees it, a gift represents an investment in Harvard’s future. “It’s about getting together and saying, ‘How do we take this great University and make it even better for the next generation?’”

Sangu Delle is a co-chair of the 5th Reunion for the Class of 2010.

As seen in HARVARD MAGAZINE

Choose Harvard today with a gift to the Harvard College Fund.