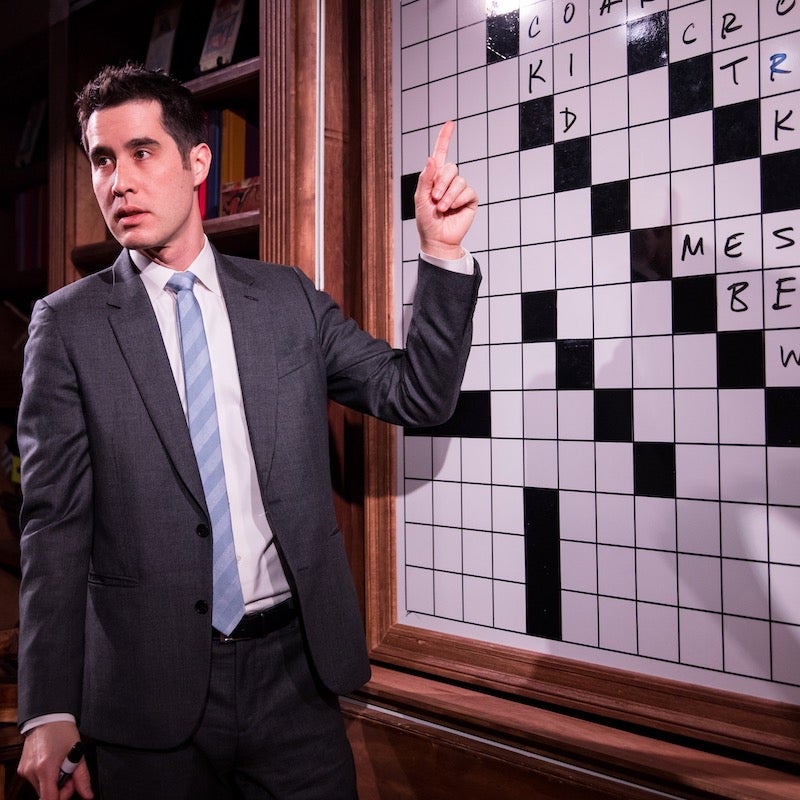 “There’s no magic in magic,” David Kwong ’02 tells audiences at his show The Enigmatist. “None of this is real.” Kwong remembers first doing tricks in his living room while growing up in Rochester, New York. But his time at Harvard led him from this childhood love to a deeper investigation into the history of magic and the role of race in theatrical performances. It’s informed his distinctly cerebral brand of magic. Learn how his undergraduate research still serves as a source of inspiration and introspection for him—and why he believes this is the golden age of word games.

What drew you to Harvard?

As the son of two professors, I was encouraged to take my studies seriously. [His mother is Joan Shelley Rubin ’69, a former history and literature concentrator at Radcliffe]. I loved performing in high school musicals and knew I wanted to do something in entertainment and media. And I always felt that if you went to Harvard, you could do anything.

In your bio, you share that you studied the history of magic at Harvard. Can you talk more about that?

The History Department was so welcoming to me. When I said that I wanted to study the history of magicians, they said: sounds like a great idea. So I wrote as many papers as I could on the history of entertainment and magicians. For my junior tutorial, I went into the Harvard archives, which is so vast and deep, to look at the history of Blackface in theatrical performances at Harvard. This paved the way for my honors thesis, which looked at Asian impersonation in magic shows.

How has your research on race shaped your career as a magician?

I was captivated by the rivalry between the Chinese magician Chee Ling Qua, who was known as Ching Ling Foo, and William Robinson, an American who pretended he was Chinese and performed under the stage name Chung Ling Soo.

There was this interesting tension in magic shows at that time. On the one hand, Asian impersonators were revering Asians by invoking the mysticism of the Far East. On the other hand, Asian impersonators were scorning these “invasive” immigrants at the same time. It’s fascinating to trace that through the decades. Today, you still will find magicians with mysterious boxes that often have fake Chinese characters on them or those who will throw on a turban and predict the future. It’s pervasive. I’m going to take my thesis, 20 years later, and couple it with my own personal story of being both Asian and white into my next one-man show. So that’s coming in the next couple of years.

What inspired you to combine history, puzzles, and magic in your shows?

I realized that I could cross-pollinate the magic that I love with the puzzles that I love. For example, my show The Enigmatist combines magic, puzzles, and a bit of history: the story of William and Elizebeth Friedman, America’s first codebreakers. An academic examination of the history of magic is not something that’s done often on stage. During the pandemic, I also did a virtual puzzle show called Inside the Box. It was an interactive game show, again highlighting the history of puzzle makers, and I live-streamed it via Zoom, inviting people to solve brain teasers that I put up on the screen.

How do you solve puzzles on the fly so quickly?

I'm demonstrating the vaudevillian performance of mental gymnastics. There’s always been a rich tradition of performers doing quick arithmetic or other brain exercises. I do it with puzzles, and it comes from almost two decades of constructing crosswords and knowing how to fill out those grids. Most magician’s tricks rely on the illusion of spontaneity—the audience is unaware of all the preparation. It’s like watching an Olympic figure skater who has put in the tens of thousands of hours of practice. You are only seeing the manifestation in the moment. With magic, the same thing is happening. Usually, the magician is trying to hide all the preparation. But I enjoy being very transparent about the hours of preparation that have gone into making something seem so effortless when it’s not.

You’ve written about this transparency in your book: Spellbound: Seven Principles of Illusion to Captivate Audiences and Unlock the Secrets of Success. Why share what’s behind the curtain?

I think there’s entertainment and educational value in teaching people the fundamental principles that inform magic tricks. When I come on stage in The Enigmatist, the first thing I do is to expose how a trick works—for example, how a magician appears to saw a lady in half. I say, “None of this is real, folks, and this is all a puzzle for you to figure out.” I don’t pretend to have magic powers.

You’re also a passionate cruciverbalist, and your puzzles have appeared in the New York Times, Los Angeles Times, and Wall Street Journal. What’s one of your favorites?

One of my favorite puzzles was a collaboration with fellow Harvard graduate Kevin Choset ’01 that was published on April 1, 2006. It was also a Saturday puzzle, which is the hardest day of the week. It’s a real honor to get to construct the April Fools puzzle. My wife and I are expecting our first child on April 1, and I hope that day sticks!

Wordle was so explosively popular last year. Why do you think word games are so appealing these days?

We’re in a golden age of word games right now. And we’ve seen it with board-games, role playing games like Dungeons and Dragons, and certainly puzzles. I think it’s cool to be smart right now. And I'm grateful for that.

You make it a point to return to Cambridge for your Reunions and serve on your Class Committee. What inspires you to stay connected to Harvard?

You can count me in for every five years. I love reconnecting with all my old friends and seeing all the remarkable things they’ve done. I usually do some performances on campus. Many of my classmates have hired me to perform for their companies, which is the ultimate compliment!

What career advice would you give students now at Harvard?

I think the most powerful and useful asset is to have a broad liberal arts education that teaches you how to research, write, and think critically. It arms you with different tools you can use to sculpt your career. I’ve pivoted so many different times. It’s all largely been in the field of media and entertainment, but I would say all experience is relevant. And everything you learn builds on itself. I think I took some risks, but I’ve always known that I could fall back on my education and these experiences.