“Being a Radcliffe Fellow Was Fundamental to the Discovery” 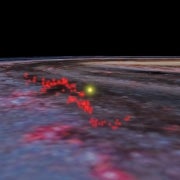 Astronomer João Alves came to the Radcliffe Institute for Advanced Study to create a 3D map of the sky, but what he discovered overturned the common conception of how stars are born and compelled scientists to rethink the framework of the galaxy.

A professor of stellar astrophysics at the University of Vienna, Alves focuses on understanding how natural processes change large interplanetary clouds of gas into stars and planets, and ultimately form life. He chose to pursue his research at Radcliffe because of its creative, multidisciplinary approach to collaboration. As the Edward, Frances, and Shirley B. Daniels Fellow at Radcliffe, he was able to partner with Alyssa Goodman, Robert Wheeler Wilson Professor of Applied Astronomy and co-director of Radcliffe’s Science Program, and Catherine Zucker PhD ’20 to dive deeply into massive amounts of data flowing from Gaia— a satellite from the European Space Agency that precisely measures the position, distance, and motion of the stars.

Using advanced statistical tools to analyze and interpret this data, the team created a 3D map of the Milky Way. What the information revealed shocked the researchers: a long, thin, gaseous structure in the shape of a wave, containing a giant, undulating filament of star-forming regions—the largest ever seen in our galaxy. The structure was named the “Radcliffe Wave” as a tribute to the community that made its discovery possible.

“Being a Radcliffe fellow was fundamental to the discovery. It gave me space, but more importantly, it gave me time: the time to think, analyze, to think again, and to finally find what has been hiding in plain sight.”

Alves’s fellowship was made possible by pioneering computer scientist Shirley Daniels AB ’48. In an era when women were discouraged from pursuing careers in STEM, she taught herself how to program first-generation computers and master machine language. Every year, Radcliffe welcomes a new Edward, Frances, and Shirley B. Daniels Fellow to pursue an individual project in the sciences that benefits from Harvard’s multidisciplinary community.

Daniels established her gift using an insurance policy to mark her 50th Reunion, an approach that ensures the proceeds of the policy will be guaranteed to Harvard. With this fellowship, she is helping new generations of scientists to continue pioneering novel research efforts that lead to big discoveries like the Radcliffe Wave.

For Alves, an unexpected collaboration was key. During his time on campus, he was inspired by the conceptual artwork of Anna Von Mertens, who crafted quilts with stitches crisscrossed through the fabric like stars hurtling across the horizon—which is exactly what they represented. Nearly a century before Gaia’s supercomputing powers, the trailblazing “women computers” of the Harvard Observatory calculated and measured galactic distances on their own by studying glass-plate astronomical photographs, providing direct inspiration for Von Mertens’s creations, commissioned for an exhibition by the Radcliffe Institute.

Together, the astrophysicist and the artist looked at the data gathered from Gaia. Von Mertens took a completely different approach to the images, asking Alves questions about how the universe opens up. He realized that thinking like a visual artist could lead to even more possibilities: What if the shape they were mapping wasn’t an expanding ring, which was the prevailing hypothesis, but instead a ripple or a wave—like the shape of a stitch on an interstellar quilt?

Being at Radcliffe helped him see things that no one had seen before. “The whole experience was very uplifting and I am thankful for the inspiration I got from other fellows working in completely different fields,” Alves says. “It was a truly interdisciplinary group with open minds and generous hearts. This unique magic can only take place because of the wonderful conditions offered by the Radcliffe Institute.”

For more information about charitable giving techniques, please visit our webpage or please contact us here with any questions.