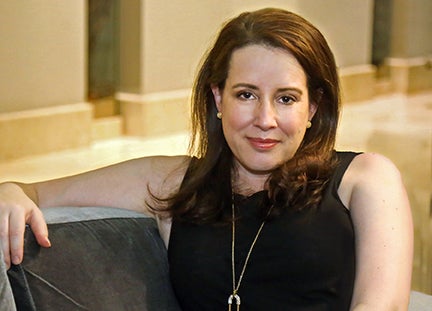 While the identity of Lady Whistledown may have been one of 2021’s most delicious secrets, the author of the Bridgerton novels has been on must-read lists for decades. At least her pseudonym has, ever since she first adopted it before she started medical school. As Julia Quinn, she’s made such a name for herself that even her family often calls her “JQ” in group chats. Her Harvard classmates may know her better as Julie Cotler ’92, who spent her time on campus living in Pennypacker and Mather, dating Paul Pottinger ’90, and working for Harvard Student Agencies. They may not have known she was always writing on the side as an undergraduate, but it would be impossible to ignore now—with three dozen romance novels and a deal with Shonda Rhimes and Netflix that led to the series everyone was streaming during the pandemic. Living in Seattle with  (now husband) Paul, Pottinger shares why she stays connected to Harvard and how an early rejection of her work was her ticket to the Yard.

Can you share with us why you think you got into Harvard?

I had good grades, good scores, took challenging classes, but so does everybody, right? But there was one thing that was different about me, and it was that when I was a teenager, I wrote a romance novel. There was a question on the Harvard application the year I applied: you could list five or 10 books that meant a lot to you, or you could choose one and write about it. So, I chose the book I wrote myself and talked about the experience of writing it and having it rejected.

I wrote it for Sweet Dreams, which published Harlequin-like romances for teens. I had sent it off to them when I was 16 with what I thought was a very good cover letter. I talked about how I was a teenager myself, and thus I felt that they would find it authentic. It was rejected so quickly I know there is no way they actually read it. I mean, no one gets rejected out of a slush pile in under a month. I’m sure someone saw my age and thought—this can’t be any good.

What did you learn about writing at Harvard?

Writing is a kind of muscle. Yes, there are some people who I think are born storytellers or fiction writers, and there are certain aspects of voice that can't be taught. But you have to know how to write a proper sentence. You have to learn how then to vary the sentence structure. You need to make sure your sentences don't go on too long. You need to know what the rules are so you know when you can break them. And writing paper after paper after paper is incredibly good practice for going on to write a novel.

You dedicate your books to your husband, Paul, who you met the first week at Harvard. As a romance novelist, would you have had your characters fall in love so early in the story?

I tell my children all the time that if I could write my own story, I would not have met him so young. We started dating in October of my freshman year. I think, honestly, I missed out on some important and special aspects of the college experience because I became serious with somebody so quickly. I’m certainly glad I didn't throw him back because of that, though. Obviously, it worked out.

Why do so many romance novelists have pseudonyms? Why did you choose one?

It used to be required by Harlequin. Some companies demanded it. But that was a long time ago. For me, it was because I went to medical school for a short time, and I felt if I was going to have a career in medicine, I needed to keep it separate. I got into medical school the same month I got my book deal, and so I came up with a pseudonym. When I decided not to go into medicine, I was already somewhat established.

An early profile of you in Time Magazine made a point to say that that it was unusual for romance novelists to go to Harvard. Why do you think?

The funny thing is, early on in my career there was an article in Publishers Weekly about up-and-coming romance novelists that made a big deal about how one of them (not me) went to Harvard. But when I looked through the ten authors they were profiling, there were three who had gone to Harvard or Radcliffe. (Michele Jaffe ’91, PhD ’98; Mary Bly ’84 (who writes as Eloisa James), and Ciji Ware ’64.) If you add in me and Phoebe Faux Belsley ’94 (who writes as Caroline Linden), we could make a (rather bad) basketball team.

You’ve written three dozen books, 18 of which are consecutive New York Times bestsellers. What was it like to see your work transformed into an enormously popular Shondaland/Netflix series?

It’s so crazy. The craziest part is how pervasive it has become in pop culture now and into the zeitgeist. It was spoofed on Saturday Night Live! The guys from The Roots on Jimmy Fallon created a really funny song about Bridgerton. And there was a spoof about the draft with the NFL—I never thought I would be culturally relevant to the NFL.

More than 82 million people watched the series in the first month. Do you think there's something about this time that found people turning to stories about romance?

I think the show would have done well regardless. There are a lot of romance readers who have been waiting for something like this. But because of the pandemic, we were all trapped at home watching more television than ever before. Ultimately, Bridgerton is a show about human connection and it came out at a time when we were missing this in a lot of ways.

Your husband is an infectious disease physician, so it’s been quite a year for both of you.

It’s been so busy! He’s a fixture on the local news in Seattle because he speaks so well on camera. A local station called us the pandemic power couple.

You’ve stayed connected to Harvard throughout the years. You recently did an event this March with students, “QuaranTEAning with Julia Quinn.” You consistently support Harvard as a 1636 Loyalty Society member, and you and Paul regularly come back for Reunions. Why do you stay connected?

I think the biggest reason is just the people I met there. (I married one of them!) They're so interesting and diverse in interest and background, and it is just such a dynamic place. I remember thinking while walking through the Square: The world is at my feet. There’s just an energy there that is so exciting and fun.