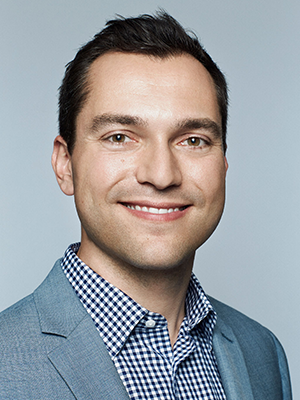 Nathan Blecharczyk ’05, who once called Adams House home, is changing how people meet, travel, and share their spaces with others. One of Airbnb’s three founders, Blecharczyk says in the early days of 2008 they couldn’t find funding for the idea to create a community marketplace that allows people to list, discover, and book accommodations globally. Today, the San Francisco-based company has seven million users and offers 1.5 million worldwide listings—including castles, tree houses, and yurts.

For Blecharczyk, a love of learning, a belief in patience and persistence, and the opportunity to collaborate with friends are the keys to his success. He shared some of this advice with undergraduates participating in Harvard’s Summer Camp, a new student-driven initiative to build community among Harvard students interning in the Silicon Valley area. The effort culminated in Digital Harvard in San Francisco, an event hosted at Airbnb headquarters that gave undergraduates the opportunity to network with local alumni in technology.

As a young man who was coding at the age of 12 and running your own business in high school, what brought you to Harvard?

I knew that I wanted to study computer science. Of course, the question was where. The big decision was between MIT and Harvard. Ultimately, I chose Harvard because I felt that Harvard had a more well-rounded student body. As excited as I am about science and math and computers, I also really appreciate the fact that at Harvard there is such a broad spectrum of interests.

You always knew you wanted to be an entrepreneur but weren’t sure where to start right after graduation, taking a “traditional” job near Washington, D.C. What changed?

I never really considered coming out to Silicon Valley. I just didn’t know enough about it, and there weren’t enough people around me who knew about it.

When I went to the Bay Area, I met entrepreneurs who were successful, and I realized that I actually had all the raw capabilities that they did. It was just a matter of plugging that capability into a problem space where a solution is needed and where a market need exists. And then suddenly you have a business.

The success of Airbnb is dependent on creating a “platform of trust” among users, a concept that some investors initially didn’t think would work. What is your advice on taking risks?

You always need to be challenging yourself. If you ever find yourself in a situation where you are no longer learning, you should consider making some changes.

I’ve taken many risks and I’ve pursued many ideas. Some of them have panned out the way I had hoped, but most have not. Every single failed experience made me stronger. I’ve learned something along the way that better prepared me for my ultimate success.

You need to acknowledge up front that there are going to be setbacks along the way, but that this is path forward. If you are persistent and always learning, then it’s only a matter of time before you are going to succeed.

“It’s amazing when you start an idea like this, how the community just grows. It is amazing how deep the Harvard network is and so cool to be at an event and talking to alumni who have had the same experiences that I have.” —Tomas Reimers ’17 started Harvard Summer Camp, a networking group for Harvard College interns in the Bay Area, with fellow undergraduates Hannah Blumberg ’16, Nicholas Mahlangu ’16, Sam Fishman ’16, Gregory Foster ’17, Karine Hsu ’16, Aran Khanna ’16, Julia Qin ’18, and Roger Zurawicki ’16.

What do you tell Harvard students who want to bring their vision into execution?

For the entire first year after starting Airbnb, we were unable to raise any funds. Investors didn’t understand the concept, and they couldn’t relate to it themselves. And then the recession began. I think what powered us through that period was twofold.

One was our friendship among the three founders of Airbnb. We wanted to stick together. I think the concept of a team and your peers are such powerful enablers. There’s a saying that you are the average of your five friends. I think having the right team can really propel you forward and get you through hard times.

Second, we created a product that had value and was genuinely interesting and special. You need to pursue ideas that you uniquely understand, even if what you understand, someone else may not. It’s always the less obvious things that are the biggest ideas, any venture capitalist will tell you. It’s the craziest ideas that become the most successful.

How do you stay connected with the Harvard community?

Harvard graduates are super smart and interesting and passionate about their interests. And that’s what initially drew me to Harvard in the first place, the fact that there were people who were not just passionate about what I was interested in, but about so many different topics.

Why did you volunteer to host Harvard Summer Camp participants at Airbnb for Digital Harvard in San Francisco?

It’s so powerful to have role models and mentors, people who can expand your horizons of thinking. I’m particularly excited about engaging with young people and using my experience and relaying that back to the next generation so that they can find their way.

That’s specifically why I was happy to host that event. People understand the work that is happening in the Bay Area and at Airbnb and can take that knowledge back to campus and use it to inform their decisions for after graduation.

Could you have predicted your success 10 years ago when you were a senior at the College?

I would say yes, though I could have never predicted the magnitude. I’ve always had confidence in myself. It’s a lesson in patience. You have to have faith in your abilities and apply them to where there is a need. If for some reason it doesn’t take off, that doesn’t mean there’s anything wrong with you. It might just mean that you should try investing in a slightly different problem space.