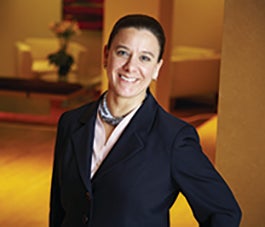 “I think it’s important to remember where you came from. Giving back is part of my core philosophy,” says Kim Wagner PhD ’94, who has given consistently to the Graduate School Fund for twenty years.

She came to the Graduate of Arts and Sciences (GSAS) for a doctorate in pharmacology, intending to go into academia. Instead, she was inspired to take on the world of biopharmaceutical consulting. “I felt like an industry position was the best place for me to add value to society,” says Wagner, who spent the next twenty-five years at the Boston Consulting Group and McKinsey & Company.

Recently, she’s taken on a new role as president and COO of CIBO Technologies, whose mission is to create agriculture ecosystems for any crop, location, or scenario. “No company or academic has been able to crack the code of simulating a primarily biological system,” she says.

“This is such an interesting opportunity to break new ground.” Wagner also consults for Flagship Pioneering and runs her own vineyard, winery, and distillery. “Busy people can do a lot of things,” says Wagner, who relishes working seven days a week.

Despite her schedule, she is a loyal, annual donor to the Graduate School Fund, giving year after year. “I have faith that the fund deploys capital as it needs to,” she says. “I want Harvard to use my gift where it will create the most value.”

Support GSAS students with a gift to the Graduate School Fund.