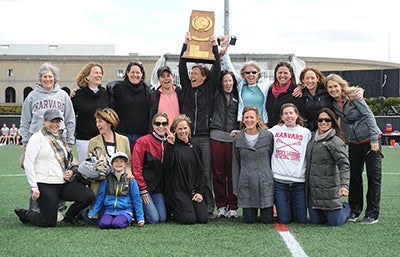 With skill, energy, and shared purpose, the Harvard women’s lacrosse team captured 12 Ivy League titles and a national championship during the quarter century that Carole Kleinfelder served as head coach. This past year, that same team spirit inspired 40 former players spanning more than 30 years to support the women’s lacrosse program by endowing its head coaching position.

The endowment honors Kleinfelder, who guided Harvard women’s lacrosse for 25 seasons, from 1979 to 2003, with warmth and high expectations, and who was a champion for equality in women’s college athletics.

“We came together to express how transformative the experience to play for Carole Kleinfelder had been and to ensure that future generations have the opportunity to play lacrosse at Harvard at the most competitive level,” says Leary. “Carole taught us that we have an obligation to give back."

Joslin and Leary belong to a vibrant corps of more than 10,000 alumni volunteers who sustain Harvard’s mission, whether they’re fundraising for their class, advising leadership, interviewing prospective students, mentoring undergraduates, or planning reunions.

For her part, Joslin serves on the Harvard Varsity Club board of directors and was a leadership member for her recent 25th Reunion, among other roles. “My first volunteer job for Harvard was as a four-year-old ticket taker at post-football game cocktail receptions in Palmer Dixon with my dad,” says Joslin, whose father, James J. Joslin ’57, is a longtime class secretary. She relishes the chance to reconnect, make new friends, and guarantee that the Harvard College experience continues to be great. “I get as much out of volunteering as I put into it.”

Joslin and Leary had long wanted to help endow the women’s lacrosse position, and their catalyst was the approaching 25th anniversary celebration of the team’s 1990 NCAA championship, held in April 2015. After working with the University to structure the gift, the pair reached out to their network of former players through phone calls, emails, letters, and meetings. Their contacts, in turn, suggested other teammates from across the years. A generous matching gift from the Landry family (Kim GwinnLandry ’93, EdM ’01 was a member of the undefeated 1990 national championship team, and her late father, Kevin Landry ’66, was a devoted friend of Harvard Athletics) provided a boost.

In six months, alumnae from the Classes of 1981 to 2012 raised more than $2.2 million in gifts and pledges for the Carole Kleinfelder Head Coach for Harvard Women’s Lacrosse—even surpassing the original goal. “There was a feeling of ‘I want to be part of this collective that is doing something historic,’” Leary recalls.

When Kleinfelder learned what the group had accomplished, the retired coach was shocked and extremely moved. “She was thrilled and we were happy to thrill her. It’s been great for all of us,” Joslin says.

For Leary, the opportunity to recognize Kleinfelder’s contribution to Harvard and her players “is one of the highlights of my life.... It was a true honor to walk into the Murr Center in May and see Carole’s name and the endowment etched in the plaque on the wall, along with the other endowed coaching positions at Harvard. I thought, ‘Wow, we did it.’”