Griffin's gift is largest in the College's history
Menu 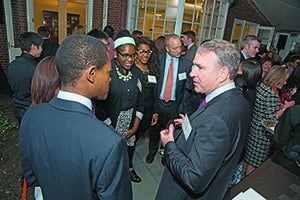 When Kenneth C. Griffin AB ’89 graduated from Harvard College with his economics degree, he did so with no student debt—a gift from his grandmother, Genevieve Huebsch Gratz.

Recognizing that not everyone has access to this kind of support, Griffin has paid his grandmother’s gift forward in a big way. His $150 million gift to the University principally supports need-based financial aid for undergraduates. His support of financial aid is the largest gift in the College’s history and honors the generosity and hard work of Gratz, a widow who managed three farms, an award-winning seed business, and a large oil business in Illinois.

“The greatest legacy I can leave behind is for Harvard to open its doors to everyone who’s qualified to go there,” says Griffin, founder and CEO of Citadel LLC.

To that end, the majority of Griffin’s gift has been designated for financial aid. The money will benefit as many as 800 students every year, establishing 200 Griffin Scholarships and, through matching funds, inspiring the creation of 600 additional scholarships through the new Griffin Leadership Challenge for Financial Aid. Griffin hopes the challenge fund will encourage others to contribute to the financial aid program.

“It’s about having a chance to play a part in helping to ensure the next generation of leaders in America has access to the finest institution in the world,” he says.

For the Chicagoan, the gift is testament to his own Harvard experience, where he started his investing career as an undergraduate, trading bonds from his room in Cabot House with investments from family and friends (including his grandmother); he even installed a satellite dish on the roof of Cabot House to get real-time market data. A year after graduating, Griffin founded Citadel, a global financial institution that now manages more than $24 billion in investment capital.

“Simply put, my Harvard experience changed my life,” says Griffin. “My hope is that with this gift we will make it possible for the best and brightest in our nation and in our world to have the same experience that I had at Harvard.”

“Ken’s astounding philanthropic leadership has set financial aid—one of the most important priorities of the College’s capital campaign—on a lasting foundation,” says Michael D. Smith, Edgerley Family Dean of the Faculty of Arts and Sciences and John H. Finley, Jr. Professor of Engineering and Applied Sciences. “Ken’s gift will help us sustain our revolutionary financial aid program and ensure that once a student is admitted to Harvard College, cost of attendance is never a barrier. It will impact the lives of students and their families, now and for generations to come.”

“We strive to attract the best students with the highest leadership potential to our educational programs, regardless of their financial means, and to ensure that they can pursue careers where they can make a difference in the world. This gift will help us achieve those goals,” says HBS Dean Nitin Nohria, George F. Baker Professor of Administration.

Griffin, who celebrated his 25th Reunion last spring, has long supported financial aid initiatives at Harvard. In 1999, in his 10th Reunion year, he established a scholarship at the College in honor of his grandfather, Wayne R. Gratz. He is currently one of the financial aid co-chairs for The Harvard Campaign for Arts and Sciences, alongside Timothy R. Barakett AB ’87, MBA ’93, Lloyd C. Blankfein AB ’75, JD ’78, and Gerald R. Jordan Jr. AB ’61, MBA ’67. Griffin also served on the Faculty of Arts and Sciences Financial Aid Task Force in 2004, which approved a new financial aid case statement for the College, leading to new policies that expanded the reach of the financial aid program.

Griffin says his goal in supporting financial aid “is to make sure Harvard remains the world’s greatest meritocracy of the mind, open and accessible to the world’s most talented young people—young people who will change this world.”

“I’ve been interested in financial aid for more than a decade,” Griffin says. “This isn’t the first gift I’ve made to Harvard, and it’s not going to be the last.”