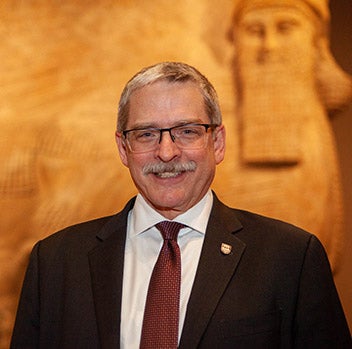 John “Jay” Ellison is the Dean of Students in the College at the University of Chicago. Ellison began his career in emergency services, first as an Emergency Medical Technician and then as a Police Officer. After serving in Law Enforcement for 4 years, Ellison entered College and earned his BA, Summa cum laude from Southeastern College (now Southeastern University) in Lakeland, Florida, working as a bodyguard while pursing his studies. After graduating in 1989, Ellison continued his study of ancient languages at Harvard Divinity School, earning a Master of Theological Studies in 1991. In that same year Ellison entered the PhD program in the Department of Near Eastern Languages and Civilizations (NELC) in the Graduate School of Arts and Sciences at Harvard.

Ellison conducted doctoral dissertation research in the Arab Republic of Syria in 1997-1998 on a Fulbright fellowship. He then earned both his MA (2000) and PhD (2002) in Near Eastern Languages and Civilizations. In 2002, Ellison became the Allston Burr Senior Tutor (now Allston Burr Dean) for Lowell House and a Lecturer in NELC at Harvard. Ellison moved into the position of Secretary of the Administrative Board of Harvard College, the committee that oversaw all exceptions to academic requirements, academic review, and discipline, in 2005 and was promoted to associate dean in 2008. At Harvard, Ellison served as a Teaching Fellow, Instructor, Preceptor and Lecturer and taught regularly in NELC.

On July 1, 2014, Ellison became the Dean of Students in the College at the University of Chicago. In this position Ellison oversees a large staff of professional academic advisers as well as administrators in College programing and academic support services. Ellison also founded four offices in the Dean of Students area: the Center for College Student Success (CCSS), the office dedicated to serving students from under resourced area, first generation, and undocumented/DACAmented students; the College Center for Research and Fellowships (CCRF), which supports students looking to conduct research, as well as students and alumni in nationally competitive fellowship and scholarship competitions, and advises students planning to attend graduate school in the arts and sciences; the College Academic Advising Office (CAAO), the which includes all of academic advising in the College; and the Office of College Community Standards (OCCS), which works with students on leave, oversees academic review and discipline. He also serves on several university-wide committees and was named one of the top ten influencers in Higher Education for 2016 by the Chronicle of Higher Education.