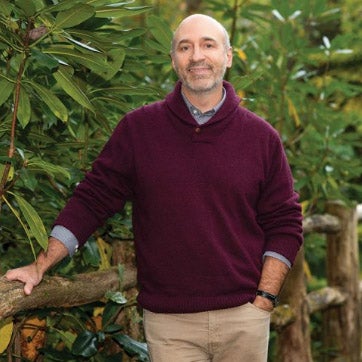 Jim Costa (RI '05) hails from the southern Blue Ridge Mountains, where he is Executive Director of the Highlands Biological Station in Highlands, North Carolina, and Professor of Biology at Western Carolina University in Cullowhee, NC, teaching courses in biogeography, Darwin, and evolution.  An avid field naturalist with a special interest in social evolution, Jim has been a Research Associate of the Museum of Comparative Zoology for 25 years, and has authored numerous research papers and the book The Other Insect Societies (Harvard, 2006).

Jim's research and writing now largely focus on Charles Darwin, Alfred Russel Wallace, and the history of evolutionary biology.  His books include The Annotated Origin, On the Organic Law of Change, and Wallace, Darwin, and the Origin of Species (with Harvard University Press), and most recently Darwin's Backyard: How Small Experiments Led to a Big Theory (W. W. Norton) and the co-edited An Alfred Russel Wallace Companion (Chicago).

Jim has held fellowships at Harvard’s Radcliffe Institute for Advanced Study, the Berlin Institute for Advanced Study, and the Humanities Institute of the LuEsther T. Mertz Library at the New York Botanical Garden, and in 2017 he was awarded the Alfred Russel Wallace Medal for his contributions to Wallace scholarship.  Jim also taught for many years in Harvard’s annual Darwin summer program at the University of Oxford, and is a regular Study Leader for Harvard Alumni Travels.