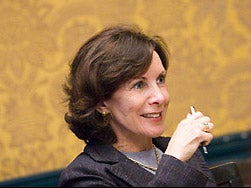 Diana Sorensen is  James F. Rothenberg Professor of Romance Languages & Literatures, and Professor of Comparative Literature.  Before joining the Harvard faculty in 2001, she worked at Columbia and Wesleyan Universities.  She is a specialist in nineteenth- and twentieth- centuries Latin American Literature, with additional expertise in cultural theory and gender theory.

Among her varied writings on Latin American Literature are the following books: The Reader and the Text:  Interpretative Strategies for Latin American Literatures, Facundo and the Construction of Argentine Culture (winner of the MLA Prize for the best book in the field in 1996), Sarmiento: Annotated Edition of his Works.  In 2008 she was awarded a Cabot Fellowship for her book, released in August 2007, A Turbulent Decade Remembered: Cultural Scenes from the Latin American Sixties.